The Special SiteSplat Membership has launched! Check our In Da Club Plan 👌
It is currently February 23rd, 2020, 4:09 am

- Contact me Via PM or e-mail for Custom work
- Deploy an NVMe server in 30 seconds. Sign up with my link and get $50 in credit.
- Get a custom professional email (@yourcompany.com), 24/7 support, 30GB of storage, and more. Google Apps For Business
- Follow me on ThemeForest to get the latest updates ThemeSplat
- Follow me on GitHub SiteSplat

Use the code KEEPGOING2020 to get a $100 credit in your first 60 days of usage at DigitalOcean.

#19119  by Leinad4Mind
January 11th, 2017, 5:20 am
I use that filter but it should be more simple, maybe on top not bottom. And maybe more visible but differently. I’ve seen others forum software as xenforo with post and topic filters very easy to use and very useful.
On phpbb it’s badly designed. :/
Want to download my extensions? Grab them here!
Appreciate my support? Show your gratitude with a donation (Ask my Paypal)
Want to access my portuguese translations? Become my Patreon!
Remember! All your problems are probably already solved.
Do a Search first or check the FAQ Support topic.

Re: Post filters at the end of a topic 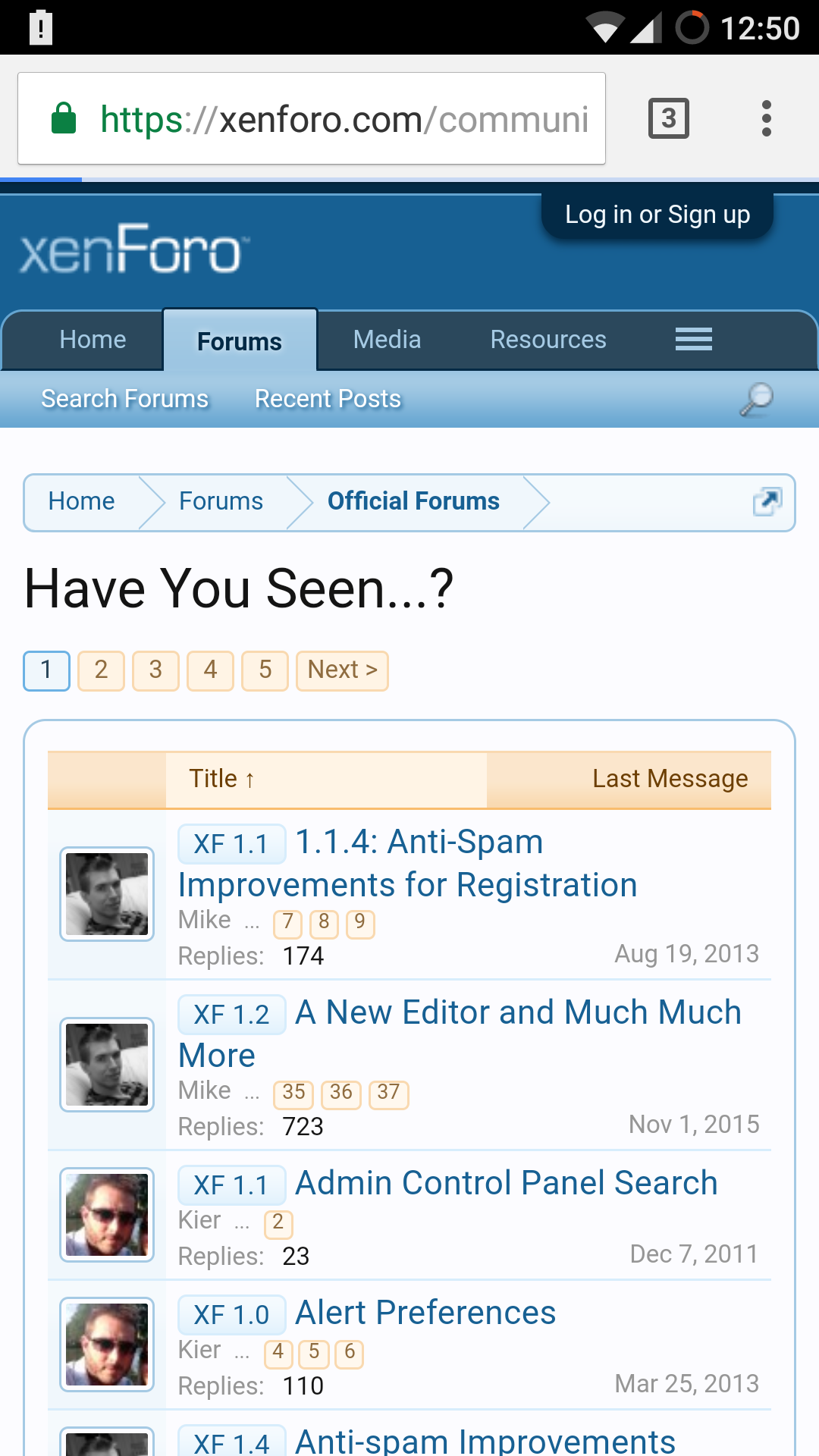 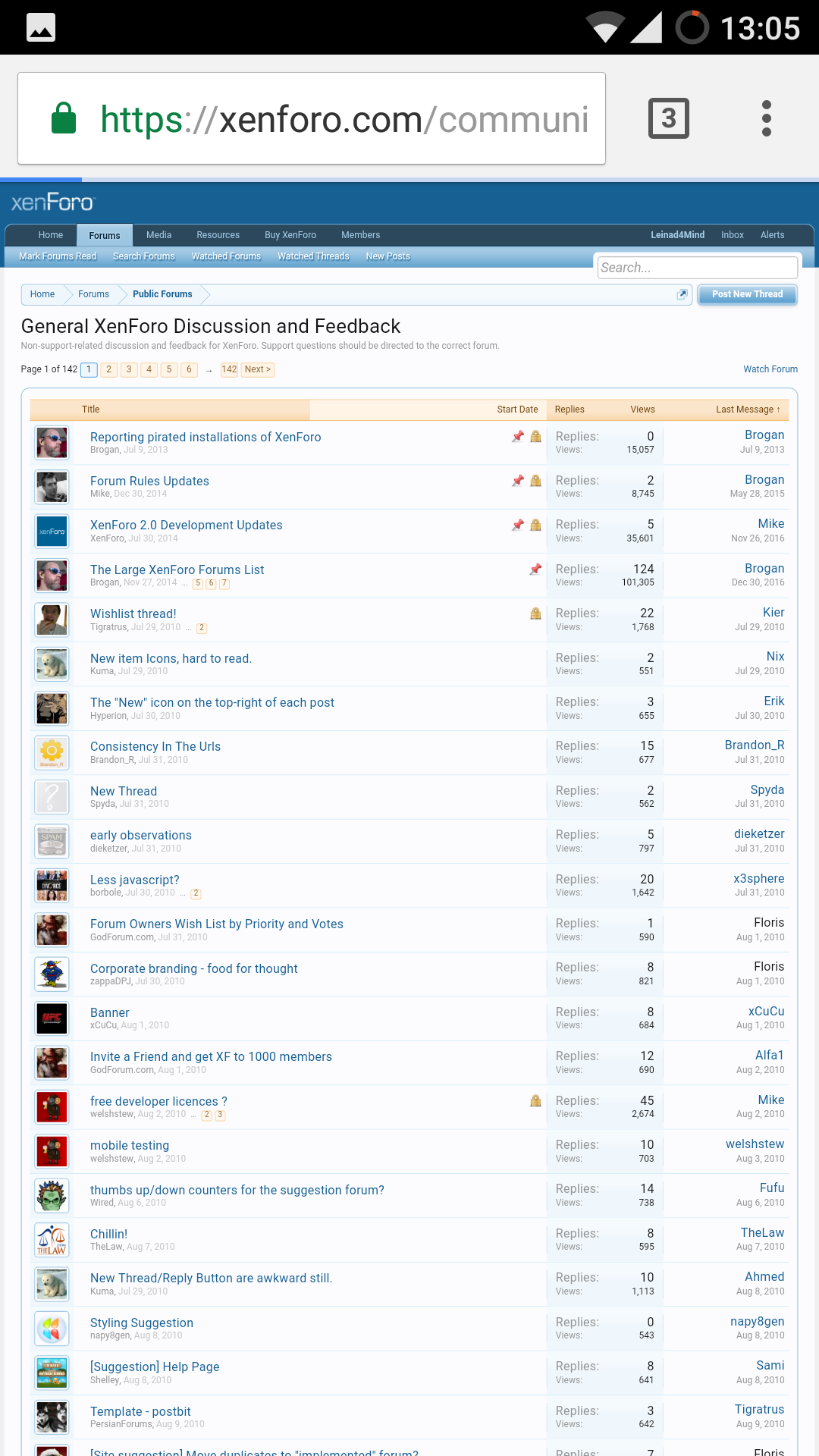 This is what I was talking about.
At least in viewforum since we’ve already the top bar, it could be used to filter the topics. 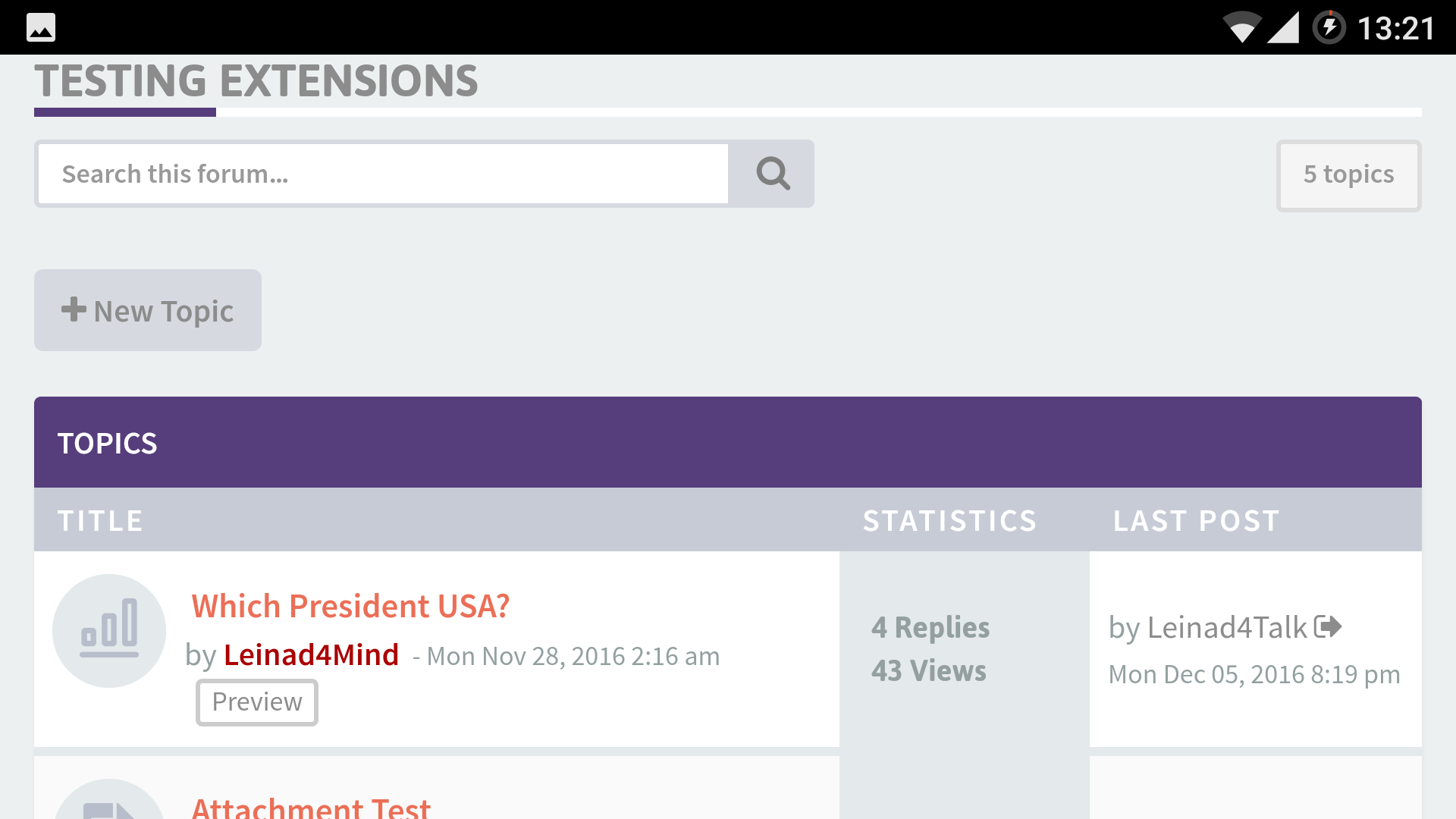 In viewpost it doesn’t make sense to have a top bar as in viewforum for everybody, so I would probably keep as it is on yours theme, hidden. In fact I have a better idea: 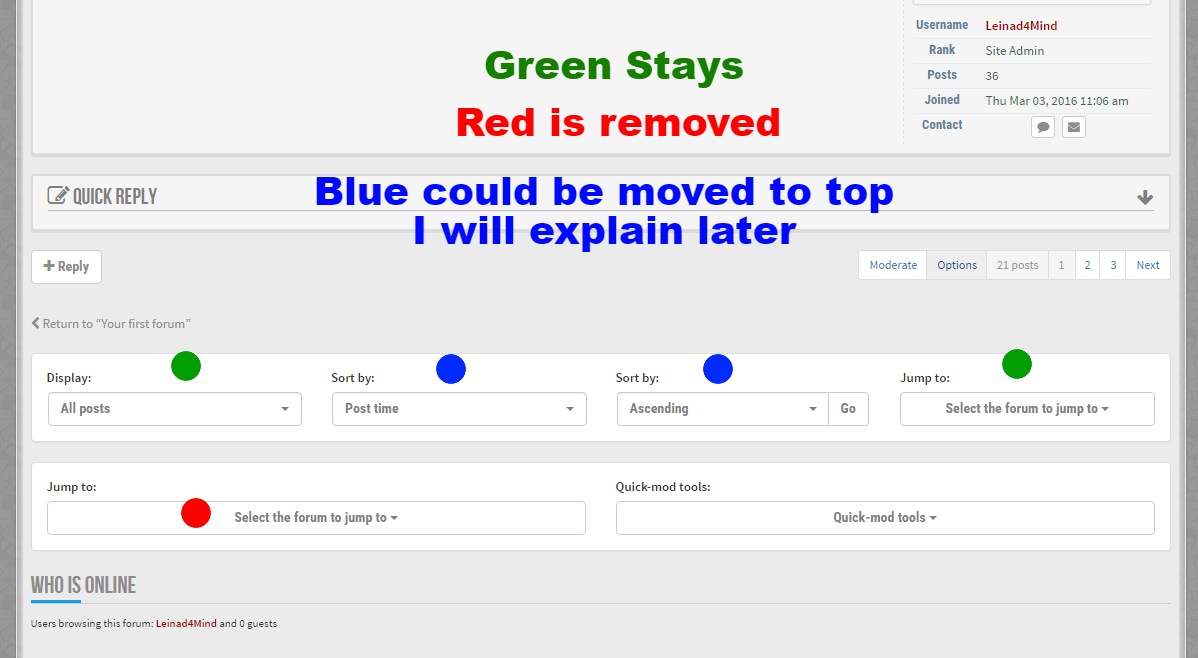 If I’ve only 1 message on viewtopic I would still have the “Option” button.
And I would put the Display etc that has no use as disabled and not possible to be clicked but still visible, so users will not wonder the lack of the button on that special case. I would put like this on viewtopic:

And for moderators, since it will only have the “mod tools”, as you can see on the image above, maybe the “moderator” button should have the dropbox list of mod tools on it… just for not having just the mod tools on that line…

Something useful to have on that “option” button, maybe via some extension, would be the possibility to filter a topic by username, like this MOD: https://www.phpbb.com/customise/db/mod/ ... isolation/

Now getting back to the 2 previous images, the one with blue color on sort by, if I was making your themes, I would remove those sort by from “option button” from viewtopic and viewforum and put it here like those examples below. I want to do this change so badly

and I guess your theme would win more to have those changes for all members, because the “sort by” feature is something very useful and many people want to use that, but on the “option button” no one see it, and the “display” and the “jump to” are extra options that almost nobody uses, so it doesn’t matter to be a little more hidden, but not for the “sort by”… those are very handy and should be like this: 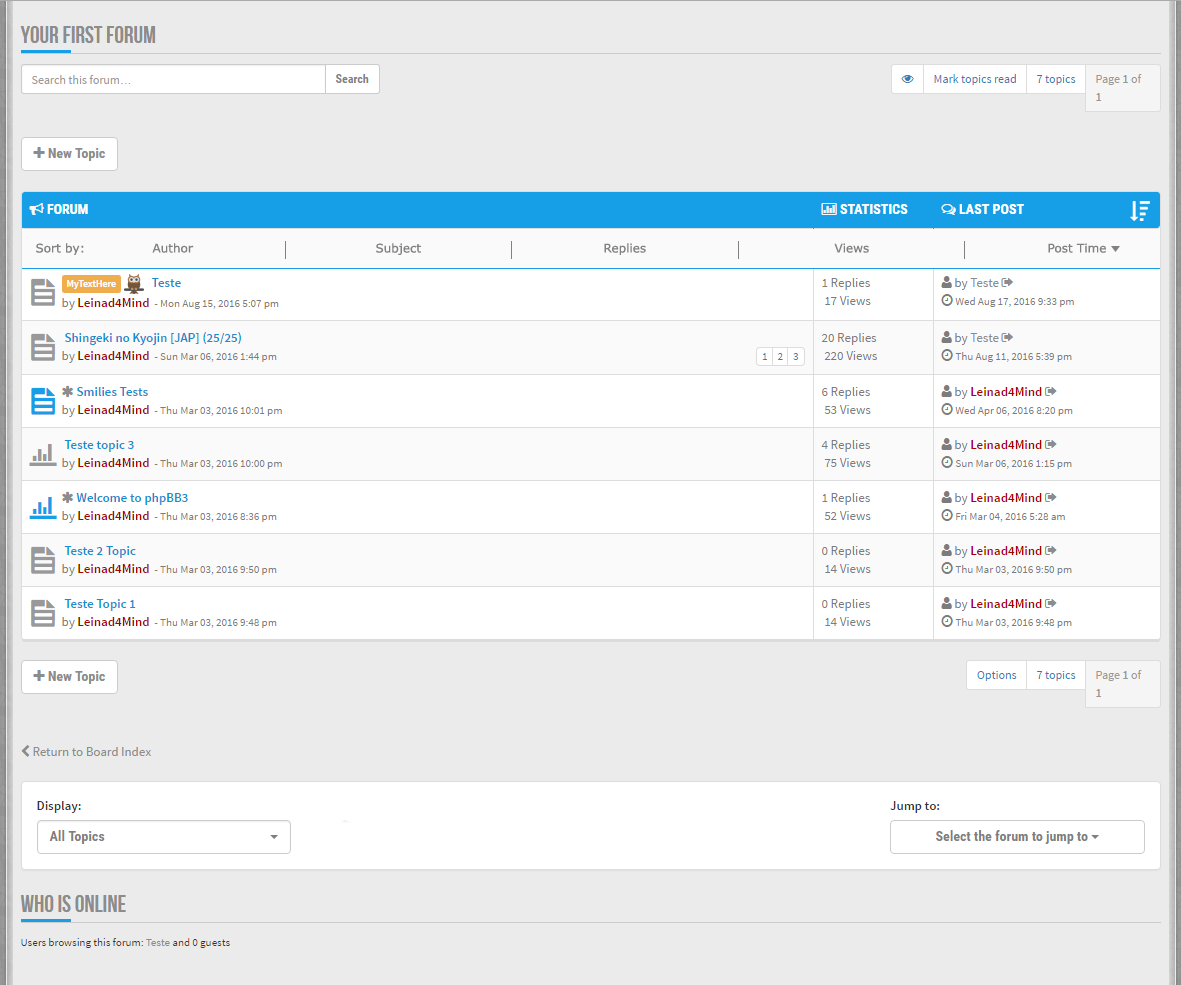 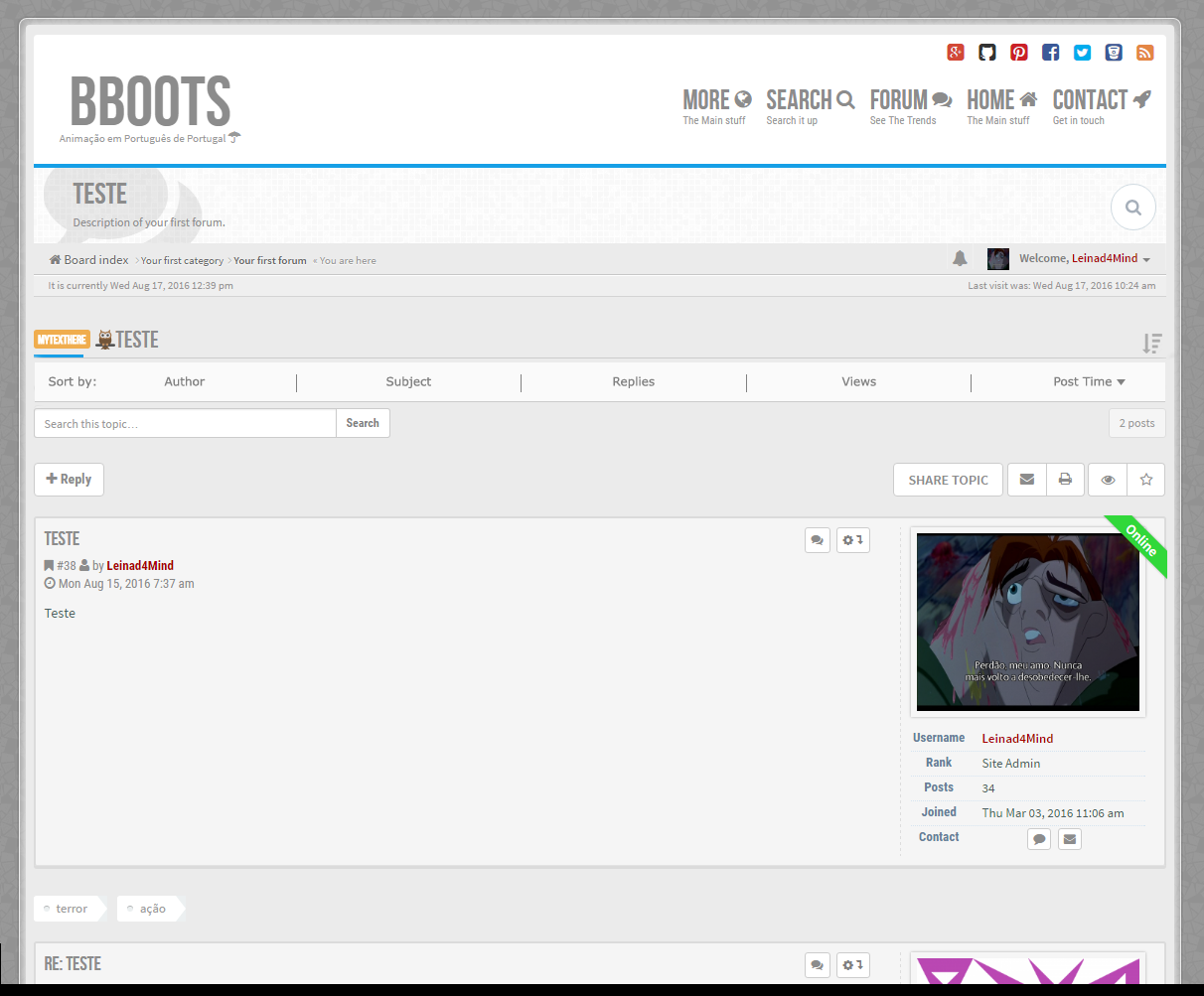 But by default it would be hidden, and the sort bar would appear just after clicking on the right button.

One thing I still think 3.1 and 3.2 should have is on post filters have the deleted date, so we can order on big forums all the deleted message so we can see all of them and easily delete them permanently or not. On 3.0 we had the trash bin mod, now that 3.1 basically have the trash bin included it could have this too…

I hope my engrish and explanations to be understandable.

Want to download my extensions? Grab them here!
Appreciate my support? Show your gratitude with a donation (Ask my Paypal)
Want to access my portuguese translations? Become my Patreon!
Remember! All your problems are probably already solved.
Do a Search first or check the FAQ Support topic.